The University of Connecticut's women's basketball team is paying their respects to the late Gianna Bryant. The 13-year-old star and UConn Husky hopeful was killed in a helicopter accident with her father, Kobe Bryant, and seven other passengers. Kobe had four daughters, but his passion for basketball ran deep in Gigi's veins. The five-time NBA champion was the coach of his daughter's basketball team and did everything he could to expose her to the highest level of talent across collegiate and professional leagues, most notably with UConn.

It was her dream to play for the well-decorated Huskies, and on Monday night, they gave the late Gigi a special jersey tribute. Before the game against Team USA, the UConn Huskies held a moment of silence for the loss the basketball community and the rest of the world is reeling from. In a seat on their team bench, the Huskies placed a special jersey with her No. 2 on it and a bouquet of flowers. "Mambacita is forever a Husky," the team wrote on Twitter.

Following the news of Kobe and Gianna's untimely deaths, the team shared a message on social media. "Kobe and Gianna meant a lot to our program. Our thoughts are with the Bryant family. Mamba Mentality will live on forever, but they are deeply missed. 💙" Celebrity tributes have poured in following the Jan. 26 accident, and as the world continues to mourn, the sports world is honoring the legacies. See photos of UConn's jersey tribute for Gigi Bryant ahead.
Related: An ESPN Anchor Shared a Tear-Jerking Story About Kobe Bryant Telling Her He's a "Girl Dad" 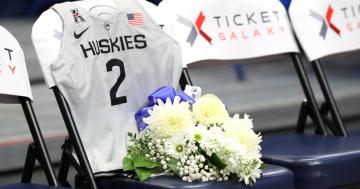