Sport for You - Sport - Health

Many books on weight training will have chapters on intensity and its importance. They describe 100% intensity as being whatever weight one can only do one rep of within a certain exercise. If you can do more than one rep of the particular exercise then its intensity is lower. Thus, the more reps one can do, the lower the intensity the weight will be.

This discussion then inevitably leads to what the maximum reps will be at certain intensities. Every trainee who has advanced to the intermediate stage will be interested in this as they want to make sure they are working at the correct intensity for the reps they are doing.

The Relationship Between Intensity and 5x5 {#body-field}

For newer intermediate trainees, it may be decided that they will follow one of the standard strength development programs where they do five sets of five (5x5) straight across. That's what Berry, Starr, Ripp, and many others prescribe---because 5x5 works.

So, they take the appropriate percentage for 5 reps for the athlete. This is about 89%, give or take, on average, often rounded to 90% for easy math (as I will do here). They may start at 85% if they want to ease into a new program---and that's okay since improvement will come fast.

Then, the trainee starts doing 5x5 for the squat, bench, and other strength exercises. However, 5x5 does not work so well with the deadlift as it can be exhausting, but for most other lifts 5x5 will work fine.

After a week or so the trainee will be using a full 90%. But things do not always go so smoothly. For example, on the last set, the 5th rep may fail. What has happened? Are they now getting weaker?

The answer is no. All is well, even with missing that last rep. In fact, that is a good sign. Why? Because it means that their intensity is at the ideal point. How is this so? They were taught that you always do your complete five reps.

What is happening is that the rep-intensity charts are based on doing only a single set, not multiple sets. In doing so, their creators have forgotten the important concept of fatigue. We only have so much in the tank for a given training session or day before we need to rest. We cannot work to 100% indefinitely. We all are intuitively aware of that.

A sprinter cannot keep up with a marathoner for long. Even the marathoner has to save his speed for the end of the race. This is true even for lesser than 100% intensities. The 90% reps also cannot continue indefinitely since the trainee will eventually show signs of fatigue. By the last set, he is running out of gas.

This is especially true when one's sets have just gone up in weight. Say one's PR squat was 300lbs and he did 270 for 5X5, as advised, and all 25 reps were completed. One may then have tested their max and found that they could now do 320. In this instance, the trainee then dutifully adds 18 pounds to their work sets (the 20lb increase x 90%).

With renewed enthusiasm for squats, they find that the last set may have only consisted of 3-4 reps while the 4th set had only 4. The trainee is not weaker, instead, they are not yet accustomed to working with the extra pounds.

Their next workout will often see them doing a full 4th set and 4 reps on their 5th. Eventually, they can do the full 5x5. They have indeed gotten stronger with that extra weight. It just takes a little adaptation time.

Most trainees will be familiar with this pattern as they gain experience. What may take more awareness is what is happening within a single set. It should be realized that the fatigue factor is also at work even on the first set. Let's look at the first set of a 5x5. The trainee above takes 270lbs for five since that is the prescribed 90% of his 1RM.

That is how just one set at a 5RM will behave. Things get hairier when we go to multiple sets in a 5x5. Depending on the individual's fitness, the effects of fatigue will show up on the last sets. On the 5th or even the 4th set that 270 first rep will feel more like 285 or so. Subsequent reps feel ever closer to 300 until at some point the perceived intensity is greater than 300. These reps will fail.

What this all means is that when doing, say, 90% sets across one, must realize that not all sets or even all reps will feel like just 90% to your organism. One will actually be working at a somewhat higher perceived intensity . As such, one will have to figure that in when programming. But how can one counter these factors when planning a workout?

One way is to attempt the full 90% on all sets, knowing that there may be failures on the last one or two sets. At that point, one can move on to the next exercise and hope that the next session will see strength improvement. Alternatively, one can take a 6th set and make up the missing reps if not adding an extra rep or two. This leaves one in a better frame of mind after making misses.

Another way, especially if one is obsessive-compulsive about making all 25 is to start at lower than 90% such that rep 25 just barely succeeds. This is a more conservative method where perceived intensity is lower at the start but higher at the end.

Regardless of the exact method, the working weights are not increased until the trainee can do all 25 reps at the prescribed weight---this will keep everyone honest.

Yet another way is the "drop set" method borrowed from bodybuilding. When one feels like the last reps will fail the bar can be lowered 5-10 pounds to ensure successful reps. They will still feel like max reps so little is lost.

The only problem is that the lifter will have to stop in the middle of the set to change weights. This can be avoided if one has two assistants that can quickly remove the unneeded plates before the last rep(s). In such cases, those plates should only be floated outside the collars. Finally, the entire last set can be dropped in weight if no help is available.

Keep In Mind the 3 Forms of Intensity

The point of this whole article is for the trainee to realize the differences among actual intensity (actual resistance), relative intensity (% of 1RM), and perceived intensity (i.e., how heavy the weight actually feels to the organism).

When programming, it is the latter that is most relevant with regard to adaptation and recovery considerations. 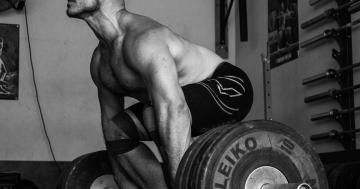