When I walked into my first yoga teacher training, I was on unstable ground. I was newly married, had just left my career in film and theatre, and was grappling with anxiety and depression. Ready to step into my next chapter, I decided to move back to Colorado, where I'd attended college and met my husband. I had zero dollars in my bank account and no community to fall back on.

I wore a purple T-shirt with wolves on it that day that was a gift from a relative. I thought it was funny. It was a Wednesday. "Wolf Wednesday," I said to my husband as I left the house. "It'll be a good ice-breaker." I was so nervous, my palms were sweating. In my bag I'd packed the entire suggested reading list, plus two notebooks, pencils, my yoga mat, and snacks to share with everyone. I desperately wanted this training to carve a path for my new life, for these souls to become my new home---my community.

See also Should You Take a Teacher Training To Deepen Your Practice?

I was the first to sign in. I sat alone on a bolster waiting for my future to arrive. Soon, a fit, blonde woman came in and sat down near me. My books were strewn out in front of me, and I was aggressively taking notes on the human skeletal system. "Was there a reading assignment?" she asked. "No!" I assured her, joking about being a bookworm. I didn't know it yet, but she would one day open the studio where I teach. Next came a beautiful young woman with dark hair and bright, kind eyes who would help deliver my son three years later. I shared my snacks with them and we joked about my T-shirt as the rest of the group filed in.

As fate would have it, one of the teachers shared a first and last name with me. After introductions, it was decided that I'd choose a nickname to eliminate confusion. Before I could pick, one dude with blond dreadlocks suggested the nickname Wolf because of the stupid shirt. I said, "Yes, that's great; I can be Wolf." And that is how it happened. Within a week, people around the studio were calling me by that name---eventually calling our whole group the Wolf Pack. By the end of teacher training, the program facilitator didn't even recognize my legal name on my certificate. Whenever I used my given name people got confused. The nickname had stuck.

People say a lot of cheesy things about yoga teacher trainings and how much they'll change you on a cellular and spiritual level. I am proof of all of those things. I became a pack leader on that first night of YTT. My nerdy, obsessive, open-hearted self stepped into a role that has dictated how I've shown up as a person and a teacher every single day henceforth. I didn't know much about wolves before I became one, but when I look over the entire trajectory of my life---from being raised in the woods without electricity to surviving abuse, cancer, anxiety, and depression, to consciously seeking community---I can see that being called Wolf was always part of my dharma.

Wolves are pack oriented. The alpha female brings order to the entire group and leads with a ferocious heart. Pack members are never left behind. Wolves are sensitive, intuitive beings who thrive in the worst circumstances. They understand yoga better than humans do: They live to serve the greater good. They hunt, play, raise children, celebrate, grieve, and even chant together. That's what howling is.

Today I lead a diverse pack of supportive and dedicated students. Over the years, they have shown up for my classes and trainings and have shown up for one another. When I lost my brother to suicide last year, every single student, teacher, and trainee held space for me and my family and went out of their way to help me recover. They grieved with me and shared their own heartbreak and loss.

We move through hard things together in my classes. After we flow, I play harmonium and sing while they lie in Savasana. We chant. I tell them I love them, and I mean it. They are my pack. Being a wolf is about showing up and meeting everyone and everything you do with your whole damn heart. That's who I am, and that's who they are, too.

I found what I had hoped for and more on that first night of teacher training---an entire community sprung up around me, named me, and gave me a home. It may seem silly, but being called Wolf has transformed me into a person who lives and breathes her purpose with fierce passion and unwavering loyalty. It has taught me that the other person is me, always, and that ultimately, we are all part of the same pack.

See also Find Your Teacher: What to Look for + Avoid in Choosing a YTT 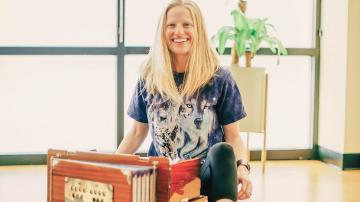