For the first two weeks of lockdown I did nothing.

Or, to be more generous to my wounded spirit, I was attempting the tricky Utkatasana-Savasana pose, which translates as "corpse stuck in a chair."

I broke my torpor when our refrigerator started making a noise like a baseball card flapping in bike spokes. The repair guy, Todd, was the first visitor we'd had in 27 days. We rejoiced: Somebody new to talk to! Todd arrived in full surgical gear, as if we'd scheduled a gallbladder operation instead of fridge repair. He removed a panel in the back of the freezer, which revealed that a vital fan blade had fallen off its rotor. He put the fan blade back on, and told me it would cost $123. I paid happily, because I got my money's worth in conversation.

"How have you been faring with shelter in place?" I ventured.

"Well, my wife and I have been doing Adriene's 30-day yoga challenge, so that helps."

In the prior week, I'd heard that name, and that challenge, from my Brooklyn-quarantined son and his Norwegian girlfriend, who lock their Maine coon cat in the kitchen so he doesn't chase their feet during practice, and from my next-door neighbor, who took a moment before our 8pm Healthcare Worker Support Howl to shout across the social distance: "Do you guys know about Adriene?," as if she had just moved in next door.

Adriene Mischler has been throwing down yoga challenges since 2015, and has accumulated seven million YouTube subscribers (including at least one refrigerator repairman) who have followed her programs half a billion times. That's enough Downward-Facing Dogs to circle the planet 500 times (check my math). Her day-one challenge has been watched and astonishing 22,706,768 times---a testament to both yoga's enduring appeal, and Adriene's ability to create it anew for each of those web yogis.

My wife and I dragged our yoga mats out to the barn, where my writing/painting/goofing off/spousal distancing/yoga studio is located. I called up the Spotify yoga channel, and appealed to the great god YouTube to deliver us from lethargy. Adriene's Thirty Day Challenge popped up.

My wife and I were sucked into an introductory sequence that progressed from seated, to nose circles, side stretches, forward folds, and a lot of inner smiling. Cat-Cow, Child's Pose, Sphinx, Downward Dog. I found myself exhausted after 30 seconds of being in a seated pose. My legs didn't necessarily bend that way, 27 days after my last in-person class. I may be the first en vivo example of rigor mortis.

Yoga During COVID Lockdown and Beyond

Adriene's class is just a half hour, and strictly the basics, but it's made new by Adriene's buoyant manner and smoky voice, which manages to walk the right side of the razor's edge between encouraging and annoying.

Thirty six minutes with Adriene is kind of the sitcom equivalent of a practice: Easy on the ears, eyes, and Down Dogs. But really, when you're stuck inside all day, with no access to your usual yoga taskmistress, isn't simple the idea? (Theresa, I know you're out there; when you're ready to kick my asana, I'm good and ready to have it kicked.)

Now we share Adriene with our son, our fridge repair guy, and our next door neighbor---all of us swept up in a YouTube class we take together (apart). Hey, any togetherness we can manage without swapping life-threatening pathogens, I'll take. 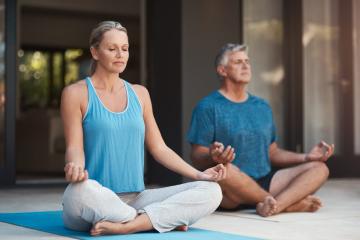