Your hamstrings largely determine how 'tight' your legs look, both for men and women. Lately more attention has been paid to training the buttocks (partly due to all #fitgirls), but especially the hamstrings are an undervalued muscle. Every athlete/fitnesser prefers to train some muscles more than others, simply because it feels good and you're probably better at it. That's because you do it more often by the way. Hamstring exercises are often skipped and often done on a fitness machine. That's a shame, we say, because the most effective exercises are done without machines.

Many of the known hamstring injuries are caused on the one hand by a reduced load capacity and on the other hand by an overload/dominance by one of the 3 hamstring muscles. For example, this may be because you only ever overload them in one way. In order to prevent injuries it is necessary to train the hamstrings optimally. This means that you have to load them versatile and in their maximum range of motion.

In this article we will not only explain the 3 best exercises to train your hamstrings, but we will also tell you why this combination is so good. To understand this, we first zoom in on the function of the hamstring and its anatomy.

The hamstrings have 3 functions:

In addition to these 3 functions, there is a fourth function, namely stabilisation in the event of opposite movements. We will elaborate on this another time.

Practically speaking you train the hamstrings in movements where there is resistance: 1) The hip is brought from a bent to a stretched position and 2) A stretched knee is brought to a bent position.

Previously, the general flexibility of our body was tested with the sit and reach test, in which the hamstrings were tested for static length. Fortunately, this test is being used less and less. The hamstrings have a static, stabilizing function when in motion, especially a dynamic function. So it really does make a lot of sense to test these muscles for static length. Dynamic load capacity is much more important. An optimal load capacity of a muscle also requires flexibility, in addition to strength, speed and mobility.

Through the following 3 exercises you train the hamstrings in a versatile way and increase the load capacity of all muscle heads. And the back of your legs will look much better!

This is perhaps the most effective hamstring exercise. Especially hip dominant and you also use a lot of buttock muscle. This exercise can be done with dumbells or with a barbell. With dumbells it is a bit easier to do it properly.

Tilt your pelvis forwards (push your buttocks backwards). First push your hips back so you feel tension in your hamstrings The knees are almost stretched and slightly bent and remain in this position during the execution. Keep your back straight to slightly concave. Rounding/rolling up the back is a no-go, as is pulling the back extremely hollow. Let the dumbells go down close to your legs while continuing to push your hips back. Use your Lats (M. Lattisimus Dorsi) to actively push the weights towards you during the movement. Don't focus on as wide a range as possible, but on the tension you feel in the hamstings. When you come up, stretch your hips all the way back out Do 3 to 4 sets of 10 to 15 repetitions.

This is a knee-dominant exercise. Attention! Very heavy and can only be done if you can brace well and have a strong core. In our example we do the exercise with an elastic band, for a little more control. This also makes the exercise a bit less heavy. First tilt the pelvis by activating the gluteal muscle. This creates a neutral pelvic position. Do not push your hip backwards, but keep it in line with your knee and shoulders. If not, you will lose valuable tension in the hamstrings. Start at the top, upright and lower yourself slowly and in a controlled way. The eccentric phase (the phase down) is what you have to train first, the movement up (concentric) is even heavier. Try to make 3 sets of 6 to 8 good, slow repetitions

We use a footpad slider for this exercise, but you can also use a towel on a smooth floor. This (again quite heavy) exercise is knee dominant, but it also has hip extension. Best of both worlds. Start stretched out, tilt your pelvis so you can use your hamstrings and gluteus. 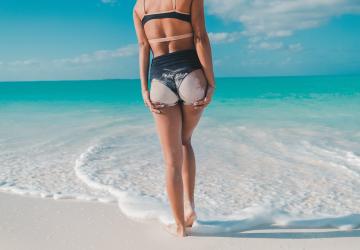